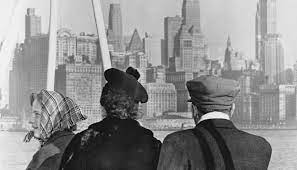 Polish immigrants arrived in the United States after the German-Polish partition, the Russian and the Austrian partition. A study by the US Immigration Commission found that 99.8% of Polish immigrants reported relatives and friends in the US in 1911. Leading to the conclusion that letters were sent home played an important role in promoting immigration.

Poland’s own country was a great source of pride for many Poles who searched for farmland and founded agricultural cities throughout the Mid-Atlantic states, especially New England.

More than 600 years ago, large waves of Polish emigrants, refugees and guest workers migrated to Europe and settled in Greece, Italy, Luxembourg, the Netherlands, Austria, Belgium, Croatia, Denmark, France, Germany, Austria, Belgium, Serbia, Spain, Sweden, Switzerland, and Great Britain. Polish immigration expanded to the United States, Canada, Brazil, Argentina, Mexico, Venezuela, Israel and Australia during this period and the former USSR in the 19th and 20th centuries. When the Communists took over Poland, many fled to American cities, including New York and Chicago.

Some aristocratic Polish emigrants – such as revolutionary war hero Thaddeus Kosciusko (1746-1817) – found their way to Philadelphia in the late 18th and early 19th centuries. However, the massive Polish immigration to the Philadelphia region began before the Civil War. It peaked in the years leading up to the First World War. Between 1870 and 1920, at least 700,000 Poles came to work in Pennsylvania’s heavy coal, iron and steel industries.

These migrations were predominantly young men looking for work, with the original intention of returning home with American income. Compared to their Galician, Austrian and Russian counterparts, Poles were highly educated, tended to stay and came from good families. Not surprisingly, many of them feared that immigrants had lost faith in the services provided to them in their native language.

This fear was shared by several members of the American Catholic hierarchy who sought to satisfy the religious needs of immigrants through the mediation of Polish-speaking priests by imbued with genuine missionary zeal. Polish immigrants came with deep spiritual passion and the habit of praising God in the vernacular. Still, to their disappointment in the United States, they could not do so. Moreover, since they did not know English, they felt religiously and socially disadvantaged.

Estimates of the number of Poles who came to the United States during the nineteenth century do not show uniformity. Loyalty, however, was fueled in the dark decades of World War II and the Cold War tensions that followed. Millions of Poles across Europe perished or lost their homes during the war. Thousands more fled after the war before the Soviet takeover of Poland.

A monument to Philadelphia’s hard-working Polish immigrants is the majestic Benjamin Franklin Bridge. It connects the city with its neighbor Camden, New Jersey, on both sides of the Delaware River.

Ralph Modjeski, the son of actress Helena Modrzejewska, was the engineer who designed and executed this record-breaking bridge construction. The bridge that began in 1924 and was completed on the 150th anniversary of the Declaration of Independence in 1926 proved to be a long suspension bridge and a long-sighted solution to the problem of road and rail transport in the region. The US president Calvin Coolidge also attended the opening ceremony. But, unfortunately, the imposing Benjamin Franklin Bridge, which connects the city with its neighbour Camden on the New Jersey side of the Delaware River, proved to be a false dawn.

The Polish American Museum is the crown jewel of the Polish-American community. In addition, the Polish Art Center is located in Hamtramck, Michigan, one of the leading Polish cultural and traditional objects.

Established 80 years ago, the Polish American Museum preserves and displays the history and culture of the Polish-American community and our ancestral homeland, Poland. The museum is founded in 1935 and opened in 1937 and consists of three parts: the library, the archive and the museum itself. The museum organizes several exhibitions a year, publishes accompanying bilingual catalogues and conducts a broad range of public programs in cooperation with other museums, educational institutions and cultural centres.

In addition to exhibitions, there are cultural programs such as lectures, films, slide shows, theatre performances, meetings and schools for people dedicated to Polish culture worldwide. The Polish-American Cultural Center welcomes tourists from around the world. It organizes conferences, lectures, and other events to encourage public awareness and appreciation of Polish heritage. Furthermore, the museum promotes Polish history and cultural knowledge by focusing on Polish and Polish-American art through its paintings, sculptures, drawings, and lithographs by well-known artists.

The Polish-American Cultural Center is dedicated to promoting Polish culture, tradition, language, history, literature, art, music, theatre and education. Inaugurated in 1988 in Beeg Cardinal John Krol and Vice President George Bush, the centre houses an outstanding museum dedicated to the lives and achievements of famous Poles. Our museum embodies physical exhibits and programs that incorporate the stories of the Polish people in the diaspora and the United States into their heritage and lives.

The humble, friendly museum celebrates the life and achievements of important people of Polish descent. On the first floor exhibits paintings by great personalities of Polish history feature into the exhibition hall. Thaddeus Kosciuszko and Casimir Pulaski (pictured above) are among the many Polish American and Polish-American heroes celebrated.]

Bohemian National Hall is operated by the Greater Cleveland Sports and Cultural Organization. It is located at 4939 Broadway Ave. in Slavic Village. The Czech Cultural Garden houses eight statues of influential Czech personalities, including Jan Amos Komensky, dubbed the father of modern education.

A gift for our future children

Educational programs and curriculum-based learning activities include K-12 school tours and teacher workshops. The Cultural Center coordinates the celebrations of Polish-American Heritage Month in October. Special events are held through guided tours and video presentations in the museum. The Polish-American Cultural Center houses a standard room for banquets and other gatherings, complete with a stage and kitchen.

Highlights of the project Jeremy and colleagues will present their work in 2019 and early 2020 at conferences. Selected members of the Polish-American Library Association have listed a great website to help librarians find materials and programs in the Polish-American community that are of interest to general library sponsors of Polish history and culture. It offers an excellent summary of what it means to be a Polish American and has many links to other sites.

Our responsibility is to ensure that our children and subsequent generations learn to understand and appreciate the customs, traditions and heritage of our ancestors who came before us.